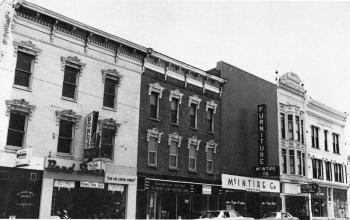 Taggart Law Firm, L.P.A., has been a mainstay of Wooster’s business and legal community since 1876, making it Wayne County’s oldest continuously existing law firm.  The firm was founded by Judge Frank Taggart, who was admitted to the practice of law on July 4, 1876, marking America’s centennial celebration.

Judge Taggart was a graduate of Wooster High School and a member of the first graduating class at Wooster University ( now The College of Wooster).  In addition to his life-long commitment to Wayne County, Frank Taggart served as a Common Pleas Judge, Circuit Court Judge, Ohio Superintendent of Insurance, Director and Vice President of Wayne County National Bank, and was a candidate for Ohio Supreme Court Chief Justice in 1914.  He passed away in 1928, and was succeeded in the firm by his son, David A. Taggart.

David A. Taggart, a graduate of Harvard Law School, practiced his entire life in Wooster.  Professionally, he served as a Director of Wayne County National Bank from 1932 until his passing in 1970.  His community service was unparalleled, as he served as assistant curator to the Wooster Public Library and Museum (now the Wayne County Historical Society) from 1925-55, and additionally spent 29 years as a Wooster Cemetery Association Trustee.  His passion, though, was the Boy Scout movement.

Today, the third generation of Taggart lawyers, James W. Taggart, who joined the firm in 1965, has retired from the practice of law and splits his leisure time between Wooster and Florida.  He, too, carries his father’s passion for history and scouting, continuing the family legacy in those endeavors.  John E. Cox practiced his entire legal career with the law  firm from 1943 -1991.  Likewise, Frank M. Hays joined the firm in 1960 and retired from the firm in 1995.Taggart Law Firm now consists of attorneys Wayne A.  Zacour ( who joined the practice in 1979), Jeffrey D. Musselman (1997), David W. Zacour (2008) and Kimberly A. Lang (2009).

Historically, Taggart Law Firm has always been located on the southwest quadrant of Wooster’s public square.  Due to its close working relationship with the Wayne County National Bank, the law firm was actually located within the bank itself for many years.  When the bank purchased the property immediately to its west in the 1970s, however, the firm relocated to a separate building on the newly-acquired land.

Today, Taggart Law Firm remains in the same building where it has resided for the past 30 years.  With the acquisition of Wayne County National Bank by National City Bank in 2004, the law firm had the opportunity to acquire the entire building in the fall of 2005, moving its base of operations from the third floor to the first floor.  The building was purchased and renamed the “Taggart Building.”

The Taggart Building actually consists of two buildings–historically known as the Brumpter and J.H. Taylor Buildings.  Built in the Italianate style, both were constructed in the 1870s.  Soon after construction, Brumpter renovated his building to connect with the Taylor Building—though the floor elevations were slightly uneven.  This characteristic of the building is still visible to visitors today.

The Taggart Building has served the community in many capacities, housing  grocery stores, an  umbrella manufacturer, a hardware supplier, and a boot and shoe store.  Today, one of downtown  Wooster’s most historic buildings continues to host one of Wayne County’s most historic law firms, Taggart Law Firm.